With the 4th season of Arrow fast approaching it would be best to get to know the season’s new big bad, Damian Darhk, play by Neal McDonough. With only a brief mention in season three, Damian Darhk is shaping up to be one of Oliver Queen’s deadliest enemies. But who was this character before becoming (Green) Arrow’s newest antagonist? Below I’ll provide an overview on this character’s brief comic history, as well as what we could possibly expect from his character for the fourth-coming season of Arrow.

Darhk made his debut appearance in the first issue of Devin Grayson’s 1999 run on Titans. During this run he only appeared for seven issues where he briefly acted as the leader of his own incarnation of H.I.V.E. (Hierarchy of International Vengeance and Extermination). It was during the Titans event, Immortal Coil (Titans #10-12), that he played a significant role in the series.

He is first seen revamping the criminal organization, H.I.V.E.  at the behest of his surrogate mother, the H.I.V.E. Mistress, who vehemently wants the death of all costumed heroes. With H.I.V.E under his control, he recruits random criminals into his organization in order to take on heroes like the Titans. Before Darhk could further his agenda he soon finds his organization at odds with Vandal Savage’s super-villain team, Tartarus; a team consisting of Gorilla Grodd, Cheshire, Red Panzer, and Siren. Their goal is to capture the H.I.V.E. Mistress, whose blood contains the components needed for an immortality serum. It was at Darhk’s floating H.I.V.E. fortress where Vandal Savage was successful in his endeavor. With the H.I.V.E. Mistress captured, it is revealed that she is Slade Wilson’s—Deathstroke’s ex-wife, Adeline Kane Wilson. Deathstroke, alongside the Titans soon barge in in hopes of stopping both of Darhk’s and Vandal Savage’s forces. Before Deathstroke could save Adeline Kane Wilson, Gorilla Grodd slits her throat. As chaos ensues between the three parties Darhk reveals that his island contains a thermo-nuclear bomb, which he drops on the country of Zandia, the country his fortress hovers over. With the Titan’s distracted, Vandal Savage proceeds to stab Darhk as he and his team escapes the floating fortress. The Titans were able to successfully diffuse Darhk’s bomb before it could land on Zandia, and as they regroup it is revealed that a weakened Darhk was able to absorb some of Adeline’s blood, making him immortal—and that’s the last he is ever seen in a comic.

During the Immortal Coil event, it could be seen how the character’s Vandal Savage, Gorilla Grodd, and Deathstroke played an integral role alongside Damien Darhk. With these character’s already showing up on Arrow, Flash, and Legends of Tomorrow, it could be entirely possible that this comic event could have some small influence over Damien Darhk’s arc for the fourth season of Arrow. 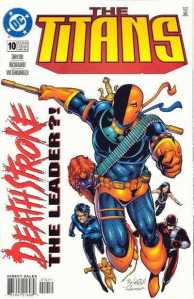 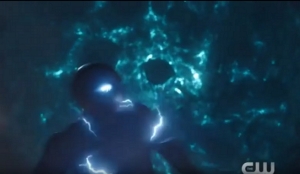 Zoom is coming. The second season of Flash is about to begin, and the Flash’s newest foe will come in the form of a new speedster. Who is he, and how is he any different from last season’s Reverse Flash? While we won’t find out that answer for a while, it should be noted that throughout the Flash’s comic history there had been multiple people who have taken on a form of a “Reverse Flash;” each with their own motive. Below, you can read a brief description of the 4 individuals who have taken on this role.

Edward Clariss, A.K.A “The Rival.” This character first debuted in Flash Comics #104, in 1949. He was originally a professor at the university Jay Garrick (The original Flash) was attending. There he was able to recreate the formula that gave Garrick his speed powers. With this formula, that he dubbed “Velocity 9,” he brought it forward to a scientific community, who were quick to dismiss his claims on the formulas potential. Angered, Clariss used the formula on himself, and took on the life of a criminal, in true Golden Age style. His time as a criminal speedster was cut short as his formula was only temporary, leading to his defeat by Jay Garrick. He would then appear shortly after for another round with Garrick, only to disappear into the speed force.

50 years would then go by before his escape from the speed force, as pure energy. He would then join a newer iteration of the Injustice Society. 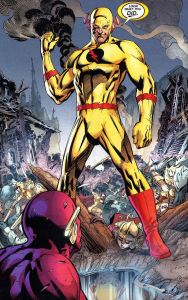 Though Eobard Thawne was the original Zoom in the comics, it appears that he (or any other alternate version) is not a likely candidate for the show’s newer version of Zoom. It should be noted that Eobard Thawne’s history is subject to a series of retcons (‘cause comics), so here’s a condense look into Eobard’s complex comic history. His first appearance was Flash #139, in 1963. He was originally introduced as a criminal from the 25th century who had gotten a hold of Flash’s costume from a time capsule. With the costume in hand he used a machine to bring out the Flash’s powers, which were contained in the suit, giving him the Flash’s abilities. During the process, the suit’s color scheme became “reverse,” causing the body of suit to become yellow, and the boots red. At the same time, Barry Allen time travelled into the 25th century in order to witness the uncovering of the time capsule that contained his suit, as it also held an atomic clock that had the had the destructive potential of an atomic bomb (‘cause comics). Hoping to find this clock the Flash pursued Eobard, who was wearing his costume, believing he knew the clock’s whereabouts. Soon a fight broke out between the two resulting in Eobard’s defeat, and the disabling of the atomic clock. Angered by this defeat Eobard had made it his life’s goal to have his revenge on Flash. 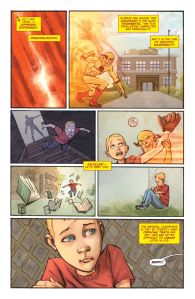 With a newfound mission Thawne had took on Barry Allen, on multiple occasions. His hate for Barry Allen had even gotten to a point where he would time travel to Barry Allen’s childhood in order to push him down a flight of stairs, letting Barry’s dog out of his house so it would get run over by a car, burning down his house, and then murdering his mother (talk about literally ruining your childhood). When Barry Allen discovered that Eobard was responsible for his mother’s death, he set off to stop him, only to create the events of “Flashpoint,” a world-changing event caused by various integral DC events being disrupted leading to a battle between various DC heroes and villains that nearly destroyed the world if it were not for Barry stopping himself from saving his own mother. Though it appears that Eobard died during the events of “Flashpoint,” he is later revealed to be trapped in the speed force. He eventually learns how to escape the speed force and sets off to ruin Barry’s life once more (rinse and repeat…).

Unlike the previous two listed speedsters, Zolomon had less villainous intentions. He made his debut in Flash Secret Files and Origins #3, in 2003. Before donning the role of Reverse Flash he was a metahuman profiler with the Keystone City Police Department, when Wally West took on the role of the Flash. While on duty he was crippled by Gorilla Grodd. Paralyzed from the leg down, he asked Wally West to use the Cosmic Treadmill to go back in time to ensure that Grodd does not paralyze him. To Zolomon’s dismay, West declines, noting that he fears that by doing this he could disrupt the time stream. Angered by Wally’s response he attempts to use the Cosmic Treadmill himself, causing an explosion that knocks him out of sync with time, giving him the ability to manipulate time, which gives him the appearance of moving at super speed. With his newfound abilities he sets off to “help” Wally West become a better Flash, by making him experience personal tragedy. 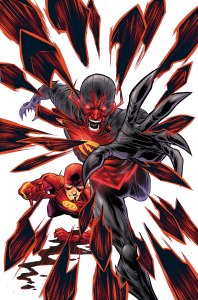 A relatively new character, he debuted in issue #0 of the new 52 run of the Flash. Unlike the CW show, he is the brother of Iris West, rather than an adopted Barry Allen. Also unlike the TV show, Iris West and her brother didn’t grow up with a cool father like Joe West, but rather a drunkard named William West who constantly abused Daniel, blaming him for his mother’s death. One day the abuse had gotten to the point that Daniel snapped, and pushes him down a flight of stairs, permanently crippling him. Shocked by his actions Daniel fled from home, leaving Iris alone. While away, he committed various small-time criminal acts which led him to being caught by the Flash, and then landing in jail for a five year sentence. After serving his time he sets out to make amends to his sister, who still would not forgive him for crippling their father and leaving her to care for him. Before Daniel could attempt to redeem himself he finds himself caught in a middle of a hyper-intelligent gorilla army invasion (‘cause it’s just another Monday in the DC Universe), led by Gorilla Grodd. In the ensuing chaos he ends up in a speed-force powered monorail crash that resulted in his body fusing with the metal debris, and even attained powers from the speed force. With the powers of the speed force at hand, he sets out to travel back in time to kill his father in order to prevent him from causing any more emotional damage to his child-self—only to ironically cause more damage to his child-self. Before he could do anymore damage the Flash successfully stops him, and ensures that Daniel’s damage in the past never happened. He was then sent to Iron Heights, where he would be recruited by Amanda Waller into the latest incarnation of the Suicide Squad.

With these descriptions given, you should be a little more prepared for the new season of Flash, premiering Tuesday, 10/6!